Trellis netting is the ideal support for many commercial crops, like eggplants, tomatoes, cucumbers, peas, and vining plants.
Indeed all kind of plants and vegetables that tend to grow vertically are suitable to be efficiently sustained by trellis netting. Moreover most of them are not woody plants so their stems are delicate and easily bent.

Veggies belonging to the Cucurbitaceae family

Many cucurbitaceae crops are climbing plants thanks to their aerial parts, called tendrils. In the effort of reaching the light, these plants have a natural habit to look for any available support. Examples of popular cucurbitaceae are: cucumbers, squashes, like pumpkins and zucchini.
Hortomallas trellis netting are so strong and resistant that can be a long lasting support even for heavy cucurbitaceae crops like melons or watermelons.
Cucurbitaceae are subjected to suffer of bacterial and fungal diseases. Trellis netting allows a more efficient phytosanitary control system. 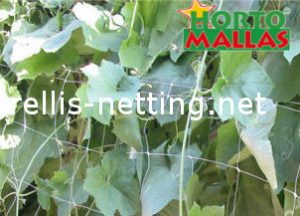 Also eligible for satisfactorily use of trellis netting are de solanaceae plants. Some of most  common solanaceae vegetables are tomatoes, potato, eggplant and peppers. They adapt very well to vertical growing. Tomatoes can be affected by Virus spread by the infected hands of the grower. Training the tomatoes plants in growing on trellis netting reduces the need of manipulating the crops so risk of infection is significantly reduced. In fact once the branches have started to climb among the net there is no need of further human intervention. 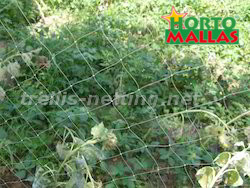